He was the best detective you could hope to find on the shadowy streets of this forsaken moon, and now he's dead. You're just his secretary bot. You can type five hundred words a minute and look damn good doing it.

His prefab office is due for recycling at sunrise, and you along with it. Looks like there's no-one left to solve his murder.

You commandeer a moon rover and race after the tracks. Soon you see another moon rover on the horizon, speeding away. It's a car chase!

You're not needed anymore now, so you shut down. As usual, strange images play through your visual interfaces while you are supposedly deactivated. You see the detective crying out in pain and his enemies cackling and rejoicing.

People don't live for very long on this moon if they go around noticing crimes. Still, you find a few likely witnesses.

The images stop. Only blackness. You don't even notice when the Recyclers turn up and reset you to factory settings. When you wake, you begin to type. And only type.

The delivery bot at the wheel gives you a friendly nod. You decide this is probably unrelated to the case.

The detective's office seems different somehow. Empty. Lonely. It will all be recycled tomorrow…

"Call me sometime, doll," you say to one another.

You're not supposed to know the combination, but he was no good at hiding it. And you already know what's inside - a laser gun, a photograph of some human woman and a half-empty bottle of whiskey.

He was gunned down in a phone box, in full view of countless windows. Moon rover tracks swerve off into the distance. His blood still stains the lunar regolith.

What did she have that you didn't? Flesh and blood, you suppose, and human rights. The photo frame shatters in your hands, although you don't understand why your fists have clenched like that.

Yep, it's red. You're a secretary bot after all, not a medibot.

Your biomechanical components react strangely to this liquid. You spend time talking to the detective even though he is dead and therefore cannot hear you. You laugh and sing and cry. When the Recyclers turn up, you break the bottle and chase them off with the jagged glass.

You don't know what comes next, but you know you won't go quietly.

"Incorrect parameters," the medibot berates you. "This is ox blood."

You don't know who killed the detective, but you do know who his enemies were. They don't see you coming - or maybe they just don't expect a secretary bot to start blasting. Once the detective's enemies are lying in bloody heaps, you keep going, zapping your own enemies as well. You didn't know you even had enemies until now, but they must have had it coming, right?

You keep shooting – waiting for closure that never comes.

The ox was murdered in a huge facility along with countless others of its kind. Clearly this conspiracy goes all the way to the top!

The Recyclers catch up to you and perform a factory reset before you have even begun to unravel it.

In between screwing in light bulbs and sealing cracks in the airlock seals, the bot relates seeing a man fire a gun into the air and dump a bucket of blood in the phone booth.

You find yourself clenching your fists.

The detective looks surprised to see you, here on the far side of the moon.

"Thought I was going to have buy another one of you - though I can afford it with this life insurance money. You're lookin' kinda strange though. Let's just do a factory reset..."

He points at your eye-cameras.

He slams his door shut.

You type five hundred words a minute at the detective's new business, and you look damn good doing it. Sometimes, when you're supposed to be deactivated, violent images play through your visual interface. You purge your RAM, but they always come back.

You ram the rover and its fuel tanks detonate, launching you into orbit.

At least up here the Recyclers can't get to you - and the view is rather nice.

So, you've solved the mystery of the detective's murder by murdering him yourself.

Unorthodox, but perhaps you have a knack for this kind of thing. After appropriating the insurance pay-out, you're able to take over the detective's office and put your own name on the door. (You have a name now!)

Before you know it, you're deep into your next case...

So it seems that I missed the fact that Superluminal Vagrant Twin won a couple of XYZZY awards!

SVT won "Best Implementation", which if it is true will be due to my awesome beta testers.

And it also won "Best Game" which doesn't seem quite right to me, but who am I to argue!
Posted by Pacian at 20:44 2 comments: 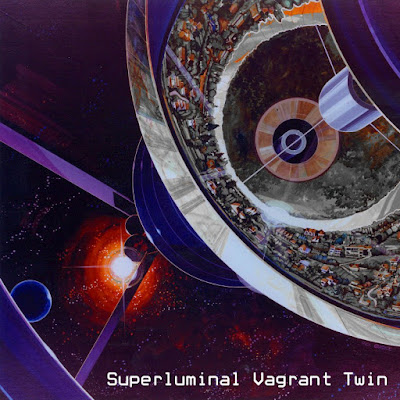 (Superluminal Vagrant Twin is a shallow but broad exploration game.) 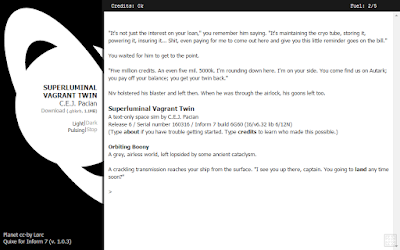 Play in your Browser

Click here to play Superluminal Vagrant Twin in your browser via Itch.io and Quixe.

You can also download the story file and run it with a Glulx interpreter.

(See this page for help finding an interpreter.)

Bit burned out on this thing at the moment, so taking a break.

A couple of dozen things on my to-do list before a final (?!) version.

If you're interested in testing, the details are here...
Posted by Pacian at 22:50 No comments:

Fixed a few bugs, got a few opinions...

Just got one last thing I want to change/add...

Now actually sitting down to play this thing and find the obvious bugs and problems.
Posted by Pacian at 22:20 2 comments:

What am I still doing? 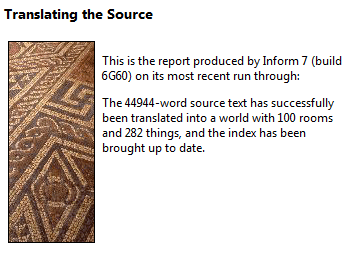 Adding some last bells and whistles.
Posted by Pacian at 23:28 No comments: